Orchestral Manoeuvres in the Docker

Buy it now!
Read a sample

Jonni’s been arguing with me this issue – he thinks Linux Format readers don’t need virtual machine orchestration. Of course, as always, he’s right, but I’ve never let being wrong stop me before… Just because you don’t actually “need” something doesn’t mean you don’t want to learn about it or try it out! There are very good reasons why Linux hasn’t had a look-in here. The Microsoft Windows monopoly ensures consumers only ever get to see Windows pre-installed on systems they buy and, of course, there’s human laziness to factor in. You might not like it but Windows works well, and has all the software and games people need. So why would the average punter or even business exert any effort to switch? Virtualisation has become such a common thing that it’s easy to take it for granted, but this also means there are better ways of managing your many virtual machines. Storing VMs on your local machine is fine, but it can become messy in terms of space and the numbers that can build up in your VirtualBox list, as an example. So this issue Jonni’s taking us through the virtual machine basics and then moving on to look at XCP-ng a network XenServer management system. It’s overkill for home users, but works a treat and is so easy to set up it seems wrong not to at least cover it. After reading our crammed feature you should have a better knowledge of how virtualisation works in general, but a better knowledge of how to manage your many, many virtual machines. It’s almost as bad as having children to home school! Finally, Les Pounder brings us another breaking Raspberry Pi Pico review. We managed to sneak the review into the issue just as we were going to press. The Pi Foundation does it again cramming so many features into a $4 device. This microcontroller in many ways is better for smaller projects that the main Pi was still being used for. We’re sure we’ll be seeing much more of it in the future, so I hope you enjoy! Write in now, we want to hear from you! lxf.letters@futurenet.com
Send your problems and solutions to: lxf.answers@futurenet.com
Catch all the FOSS news at our evil Facebook page or follow us on the Twitters. 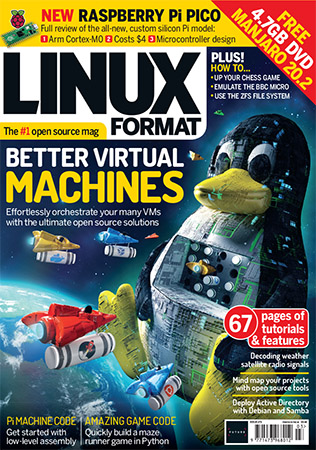 Effortlessly orchestrate all your virtual machines! We explore the best open source solutions for a simpler, easier virtual life. From the VirtualBox basics, to Qemu and on to Xen server solution XCP-ng and advanced GPU virtualisation with Intel VT-g.